"MEMOIRS OF HADRIAN" by Marguerite Yourcenar 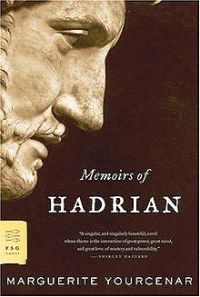 
SHORT INTRO:
Novel in which the author puts herself in the shoes of the Roman Emperor Hadrian and makes him write a long letter to his young friend (and future adoptive nephew) Marcus Aurelius.

WHY I READ IT:
This title by Yourcenar was chosen from one of my reading groups and I had never read it before.
THE STORY:
The Emperor Hadrian tells the story of his life at the end of it: his greatness, his weaknesses, his dreams, his travels through the endless Roman Empire, the childhood, the power, love, death . All the life and the thoughts of one of the greatest figures of our history, recreated through the pen of one of the greatest contemporary writers.

MY OPINION:
I want to be honest: if it hadn’t been for my reading group, I probably would have never read this book. I’m not into historical novels that much; history – unfortunately -  has always bored me, and the book would ended up back on the shelf, if I had come across it in a book store.
Besides, it has the reputation of a difficult novel, hard, even though not that it scared me, actually, but I didn’t exactly start reading it under the best auspices. After a few pages, however, I was already absolutely rapted. Rapted by the mastery of the writer, by the excellent Italian translation (by Lidia Storoni Mazzolani) and by human character. You might think – and you might be right - that we have nothing in common with an emperor who lived in the second century after Christ, but this emperor is so modern, so open minded, so like us!
After a while you forget that the letter is actually for Marcus Aurelius, because it makes us believe is for the readers; Hadrian is speaking to us, with so much emphasis and depth, with such a passion that makes him so much closer to us. Yourcenar does succeed, succeed in speaking to us through a character she has worked on for a lifetime, she is able to take on the role of an emperor who lived so long ago that it sounds almost impossible to calculate how many years separate us.
At times it’s difficult to distinguish between the figure of the writer and the one of Hadrian, which become almost two sides of the same coin. Just as if Yourcenar, during the years she spent on giving birth to this work, has developed some sort of empathy with the character, allowing her not to dwell on purely historical facts, instead focusing on the personality of Hadrian, to make him so modern and down to heart, unlike the way he has always been portraired in history books.
Unfortunately I found this book just days before the meeting with my reading group, so I could only had 4 days to finish it: regardless of the fact that it is less than 300 page long, I suggest you to devote it all the time it deserves and read it with a pencil in your hand: it’s full of quotes, aphorisms, which reflect the everyday life of a Roman Emperor and the historical events that surround him. A book you have to read again (I'll buy it), discovering new words and new horizons every time.
Hadrian is still alive, immense and touching in his humanity.