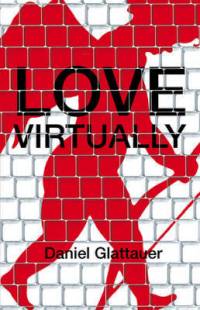 SHORT INTRO:
Epistolary "modern" novel in which two strangers, thanks to a fortuitous exchange of e-mails, fall in love and can no longer live without each other, although they have never met.

WHY I READ IT:
I was intrigued by the suject of '"Love in the Internet Era", plus the fact that the story takes place in Vienna, a city that I love.

THE STORY:
An e-mail address mistake is enough to change the daily lives of Emmi and Leo: she is a 34-years old  with an (apparently) perfect marriage, he's a 36-years old psycholinguist with an open wound because of a recent ending of a great love story.
At first it’s just curiosity, and exchange of views, funny games, but soon after comes the desire to meet and discover each other, and to feel closer. The situation gets out of hand, there’s no difference between their everyday life and of what they’re living on the web; spending an evening in front of the computer rather than going out.
Everything is adrenaline, almost like a drug: the lack of e-mails creates a true withdrawal, that only a new message in the inbox can appease.
The characters constantly swing between the desire to meet each other (and to finally give a real sense to the  image that the’ve created about  the other), and the fear of getting disappointed and ruining the magic of their virtual relationship. The story is a continuous “back and forth” and ends in a traumatic way – or maybe not too traumatic.

MY OPINION:
It 'a short book that can be read, if you want, within a few hours, as I did. So why all this success?  I think it's because anyone who has or has had a virtual love story (and it happened to many people, including me) can’t help but identifying either Emma or Leo.
How can we not experience that anxious wait for a response that sometimes comes in late, that “pain inside your stomach” if for some reason we can’t
connect to the Internet for a few days, that terrible and absurd jealousy, that we can’t reveal to the other only if we want to play it cool? Not to mention when, before clicking on the submit button, we read at least twice what we wrote, then erase it, then rewrite it all over again.
In reality, almost every time, sooner or later we meet, because the curiosity is too much, but too bad it never happens in this book!
“Love virtually” describes the birth of an intense bond, of a relationship between two people that aren’t a couple but in a virtual way became one.
Can such a relationship survive a face-to-face meeting?
…to be continued.