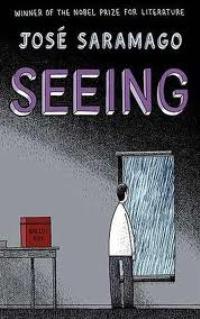 SHORT INTRO: An unknown country. An unknown city. Normal administrative elections. But something doesn’t work. Instead of going to the seaside, people take part to the elections. They leave a blank vote on the ballot. A revolutionary act? An anarchical conspiracy? A provocation conceived by lunatic fringes? Finally, the hypothesis of a connection between “the protest vote” and the epidemic of blindness spread four years before. One of the secret agents working in the capital investigates on the woman who didn’t go blind during the pandemic, believed to be the author of the blindness plague, and on her husband, an eye doctor. The agent gets in contact with her and understands the government true intention…

WHY I READ IT: I was so bewitched by "Blindness" that as soon as I found out this book was its sequel I borrowed it from the library.

MY OPINION: The ideal sequel of "Blindness" (set in the same location, 4 years later), also this book starts from an impossible event, the whole population of the capital deciding to cast blank ballot during the national elections to express their lack of trust towards any political party of their country. The government doesn’t question the real reasons that led the citizens to this decision, but it clams up, only caring about itself and its power, denying the right to a free and personal vote and claiming an attack to democracy.
Like Blindness, this novel makes us think a lot, it takes us back to that sense of choking, the feeling we have when we realize we are governed by heartless people. In this book we realize how democracy can be destroyed by thirst for power, suppression, deceitfulness and arrogance.
Saramago harshly analyses the system of our democratic countries, he writes a novel with no names for its protagonists and for its city; an undefined story, that could never happen or that, maybe, it is already taking place.
While I was reading the book, I wondered several times what would happen if the majority of our population would leave a blank vote; after finishing the book, I think I understood, almost likely things will go how Saramago described, because he painted a situation so much anguishing how only reality can be.
I really suggest you to read this book of the Portuguese Teacher, even though it leaves a lot of bitterness.